Argentinian hotshot Alexny is back with a seriously infectious four tracker, released on Furious Mandrill Records.

On the first track, ‘I Believe‘, he takes on the old dancefloor gem ‘I Believe In Miracles‘ adding drums, speed and a funky guitar riff. He takes it to the next level. You can’t go wrong with this one!

On the third cut he takes us to the playa at Rio De Janeiro with ‘Tamanqueiro‘, the original was made by  Elizio De Buzios in 1980. Alexny adds a lot of Disco boogie to it and makes it perfect for the dancefloors.

It’s my personal favourite cut from this EP and it has all the elements of a real mood raiser. Bring me more Caipirinhas!

As closing on this EP we’ve got ourself some thumpin’ African Disco with ‘Sekele Movement‘, originally written and sung by Pasteur Lappe in ’79. Alexny ours on some more Disco glitter to it, that will definitely get you up and dancing.

Alexny takes us around the world in 4 tracks. A must have!

Furious Mandrill with label boss Fernando Mendoza at the helm goes on to prove, yet again, that they are genuinely original purveyors of grade A+ tracks for the modern dancefloors. 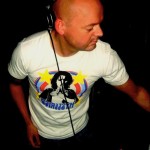 Discoholics Anonymous presents Hot To The Touch
Disco, re-edits, rare grooves and re-works. www.discoholicsanonymous.com features interviews with industry leading profiles and labels, and exclusive content. Hot To The Touch airs twice a month on Prime Radio 100.3 FM (Greece) and is available as podcast on iTunes & Spotify. Promo material can be sent to info@discoholicsanonymous.com Facebook: https://www.facebook.com/discoholicken
HOT TO THE TOUCH 030720 on Prime Radio 100.3 FM
by Discoholic Ken

This week’s beam of sunshine on your radio, Hot To The Touch on Prime Radio 100.3 FM.
We start off chilled and sunblushed and move towards a funky sunset on the horizon.

Pete Le Freq has been a pilar in the edits scene for years. He’s been

We do use cookies, but we do not track traffic, nor do we sell or third party use them. We do however read where people access us from (countries etc.) and we track how many read our articles.